Six, level 3, 5e pregens from Whispers in the Dark

Posted on March 9, 2020 by naturaltwenty

Here are the six, level 3, 5e pregenerated characters used for the Whispers in the Dark convention. They were all created using D&D Beyond (I’m a sucker for tools) and use Larry Elmore’s Character Art pack.

Whispers in the Dark 5e Recap from NewGameAPalooza

This last weekend (10/5/2019) I ran a convention game. It’s been years since I’ve run a game at a convention and most of the time I was either running Living Greyhawk (yes, I’m aging myself), Pathfinder Organized Play, or Adventurer League for 5e.

This time I decided to run a homebrew scenario that’s been bouncing around my head for at least ten (10) years. It’s got a Halloween theme and since the convention was in early October I thought I might as well put it together and see if folks like it. It’s not ready for publishing yet but I’m working on it!

Thanks to the outstanding table that attended. We had a brand-new player who seemed to have a great time and the table accommodated her. Again, many thanks, players!

Posted on September 9, 2019 by naturaltwenty

Natural Twenty Games will be running events at NewGameAPalooza 2019 coming up in early October (4th – 6th).

The following games will be run (time slots are still TBD)

Whispers in the Dark

Autumn approaches and in the small village of Chatham preparations for the Festival of the Twelve are well underway.  The harvest was bountiful this year and there is a rumor that the mayor has hired a troupe of mummers!

Cubicle 7’s Adventures in Middle-Earth™ RPG line, supported by Dungeons and Dragons 5e, is, in my opinion, one of the most seamless combinations of a rules system supporting a fictional setting I’ve had the pleasure of reading and running.  First, some background on myself and my love/hate relationship over the years with Middle-Earth based RPGs.

My first exposure to Middle-Earth was listening to an early audiobook version of The Hobbit on a 45 record (I think I still have that down the basement somewhere.  Note to self – look for it later) and then seeing The Hobbit cartoon movie by Rankin/Bass around 1980 or so.

A couple years later I remember going over friends house to play The Hobbit computer game on his Commodore 64.  At twelve years old, I hadn’t read the books yet.  They weren’t above my reading capability but the length of the book more than likely intimidated me.

During that same time frame, I got exposed to Basic Dungeons & Dragons (BD&D)by a kid in my Lutheran Catechism class – irony at its finest.  Fast forward a couple more years, we’re talking 1984, and while hanging out at the mall and perusing Waldenbooks I remember seeing, and buying the Middle-Earth Roleplaying Game (MERP) by Iron Crown Enterprises (ICE).  For some reason, I didn’t get into Rolemaster (RM) but this scaled-down version of RM, had some really neat art, awesome maps, and seemed a little more streamlined than the Advanced Dungeons & Dragons (AD&D) I was graduating to from BD&D.  Note 1 – I still hadn’t read The Hobbit or any of The Lord of the Rings (LotR) trilogy.

MERP’s character creation system took a long time, had a lot of options (even for a pared-back version of RM) but those options did make you think about the background of your character, make some plausible connections to “why am I adventuring” and you were ready to become a hero in Middle-Earth.  Note 2 – I then started to read The Hobbit and The Lord of the Rings trilogy.

Full stop.  In my mind, I couldn’t connect the MERP rules to The Hobbit or LotR fiction.  I totally get that a game isn’t a piece of written fiction or vice versa.  Two different mediums with a different outcome but they were so divergent.  This isn’t a bad reflection on MERP.  In and of itself it’s a great system but just not for The Hobbit or LotR.  Even AD&D didn’t really emulate the feel of the fiction.  Magic was just too prevalent in both MERP and AD&D and I wasn’t enough of a system tinkerer to take the magic out of either game and end up with something recognizable.

Fast forward seventeen (17) years to 2001 and The Lord of the Rings movies come out.  I re-listen (at this point I’m an Audible subscriber) to all of the books and hear rumblings at GenCon of a LotR RPG coming out.  Shortly after the first movie is released The Lord of the Rings RPG comes out by Decipher.  It’s got a great system, CODA, that emulates the “feel” of Middle-Earth.  It’s got great art, well, a lot of shots from the movies, and it’s well laid out, but I’ve got no one in my group that’ll play it.  I collect all of the material as it comes out but it sits unused for years in my library.

Years pass.  2011 hits and The One Ring by Cubicle 7 is released, and the next year The Hobbit movie hits the big screen.  Again, I’ve bought all of the material and it sits on my shelf because game time is really limited and trying out new games is not something that my group is really into, i.e. if we’re going to play, let’s play the campaign that we’ve been on for the last year or so.

2016 rolls around.  We’ve been playing 5e now for a while and Pathfinder has fallen by the wayside…it got too complex for my tastes although we loved quite a few of the Adventure Paths.  I’m not as much into RPG.net as I used to be but I see some rumblings on a One Ring 5e conversion by Crucible 7.  Hmm, another version of a game I’ve bought multiple iterations of.

Continued in Part 2 – coming next week.

A great, college-town, convention in Wisconsin’s Fox Valley.  Three days of fun for $20.00.  Make sure to check it out.

Natural Twenty Games will be there running events on Saturday (and maybe Sunday). 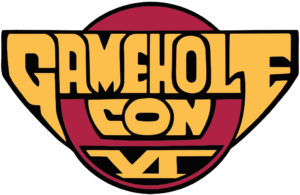 Gamehole Con 6 is coming up soon.  I attended last year and it was packed full of gaming goodness.  Like most Wisconsin conventions you’ll find a lot of the old guard from TSR days running and playing in games.  Last year Ed Greenwood, of Forgotten Realms fame, was there as well.

While the convention is getting bigger, it was well run and organized and still had that small con feel but offered enough gaming for anyone.

I’ll be running some games there this year so make sure to look forward to updates on this site an on Facebook.

Who trained you? No one.

Posted on August 8, 2017 by naturaltwenty

One of the best lines yet from The Game of Thrones.

I’ve got my Kickstarter copy of Goodman Games Mutant Crawl Classics – a retro throwback to the good old days of Gamma World.

If you’re a fan of the Dungeon Crawl Classics game then you’ll like this iteration of post-apocalyptic gaming.  While they can’t use the term black ray gun, this game has got all of the wacky things you remember about Gamma World (see image below for the Death Field Generation mutation – it may not be called a badder…but it’s a badder).

The game uses a funnel or meat grinder approach.  While this is optional I like the feeling that it evokes – don’t get too attached to any one of your initial characters.  Whichever one makes it through the initial funnel represents the role of the die, how you played the game and that feeling that this world is dangerous.

Posted on February 22, 2017 by naturaltwenty

I was just looking through my PDF’s last night – 2/21/2017  (side note – I have, let’s say, a metric ton of gaming stuff – hundreds of rpg manuals, modules, accessories, etc.  Hundreds of unpainted, still in the blisterpack, miniatures for a wide variety of game with most being out of print or multiple editions old.  I’m starting an inventory and organization project in my basement because, well, because I need to:)) and I ran across Battlesystem 2 from TSR which was focused on large scale combat for Advanced Dungeons & Dragons 2nd Edition.  I started to re-read Battlesystem 2 and do some rough conversions in my head for 5e because I’ve got a new group of players, only one whose played any edition of D&D before, and I wanted to kick-off the campaign with a large scale battle.

Each player in the campaign will get one (1) level of Fighter and  the Soldier background in addition to their normal class and background, i.e. they will effectively be starting as multi-class characters because they joined/were conscripted/or were forced to join a mercenary company…but I digress.

This morning I log into the Wizard’s site and in Unearthed Arcana there is an article for 5e for mass combat!   It’s a sign:).

Posted on December 13, 2016 by naturaltwenty

I needed to take a break from my previous book, Reign of Madness: King’s Dark Tidings, Book 2 (it’s an okay book but I am getting a little tired of the Mary Sue main character and some incessant whining from the lead female character) and saw that a couple of books by Larry Correia and John Ringo (John is the author writing in the now shared universe of Monster Hunter International (MHI)) had been released that I either missed or glossed over during the summer of ’16.

Monster Hunter Memoirs: Grunge  is what I’m currently listening to.  It’s got all of the hallmarks of the previous MHI series; guns, guns, more guns, military tactics and surprisingly good prose that makes me chuckle (and makes my wife look at me like I’m crazy:)).

The ‘memoirs’ referred to in the title are the found archives or diaries of former MHI members and delve into past missions (Grunge encompasses the mid to late 80’s) that take place prior to the first novel, Monster Hunter International.  Readers of the previous novels will recognize mentions of events that are referenced by Grunge’s main character, Chad “Iron Hand” Gardnier.  Note that the author has succeeded in leaving teasers not spoilers so it all works out.

I’ll post some stats later this week for some scenarios.